Delighted to host the first in a series of  guest blogs from IPROWE .

Had a particularly complex prow problem to deal with recently which illustrates neatly just how hard this job can be! Fortunately it came in on a Wednesday and so met my priority criteria of  wearing matching red underwear and socks on a day with a W in it. The only higher criteria would be reports received on one of the 3 Friday afternoons a year when I go commando and have not flexed off.

My tricky little prow issue came in via our Chief Executive who was showing a previously unseen interest in a public footpath report. Always a bit of a googly when the big cheese lobs one in like that isn’t it? I decided to drop everything I was doing to visit the site. Unfortunately this meant delaying serving notice on a number of obstructions for Peak & Southern Ramblers Society. Well they’ve been waiting 30 years for the priority matrix to churn them out so what’s another decade?

On the face of it the Chief Exec’s little problem seemed incredibly straight forward. Leaves on a public footpath making it look a bit untidy according to the Chair of Lower Dumpdale Parish Council who incidentally happens to be the Chief Execs brother in law. Funny coincidence that.

However when I visited the site that same day I realised the scale of the  problem to hand. Despite a nagging little voice in my head saying “Just get the brush and shovel and a bin bag  from the van and clear them away” I couldn’t help but think there was more to it than that. Clearly other matters would have to be set aside as I looked into the legal intricacies of this issue further.

We can’t do everything at once and if I’m tied up on a complex matter like the Chief Exec’s leaves then that’s time I cannot spend doing real work like moving obstructions,putting up sign posts or on definitive map work. Whilst this may be the public’s expectation I’m afraid It’s just not as simple as that . Austerity has led to huge budget cuts and now the Chief Exec only has one rights of way officer to run around after him instead of  the ten he was used too. This is bound to have an effect on levels of service we can provide to the public…..

The real blog which is a good read but perhaps does give some indication as to why things take soooo looong to get sorted in the world of rights of way.

A lot of snow drifts about up on the moors above Holmfirth. Came across the remains of a small “avalanche” this week. Not something you see very often in West Yorkshire and a novel obstruction to passage. Though not I have to say on a public right of way. 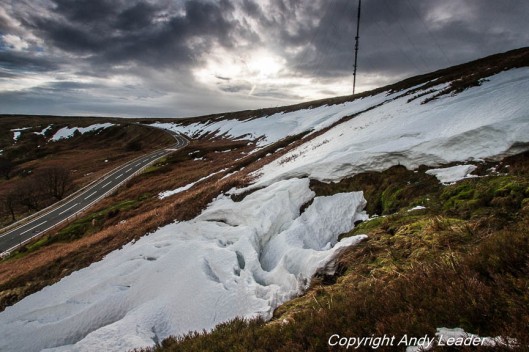 Interesting although not very detailed piece in the local rag today outlining what’s happening with Kirklees budgets for the next year. Rather revealingly the paper states Kirklees will be “Creating a venue for all council meetings, cutting external room hire, will save £150,000”

I have to admit I thought Kirklees already had such  venues! The Town Halls of Huddersfield and Dewsbury along with many other office complexes across the district would seem to fit the bill.

The public rights of way budget is down to £50k. That is for a statutory function for maintaining 700 miles of paths. It was cut from about a £150K with unseemly haste in 2010. So in the past 8 years maintenance of Kirklees rights of way has been underfunded by some £800K . That lack of funding is beginning to show itself now in the form of some very expensive problems today.

Still it’s good to know our councillors and officers have had the best venues to hold meetings about meetings in and that no expense has been spared on this essential service.

As reported previously  Holmfirth Bridleway 154  has been seriously messed about with. This is despite  planning condition 4 requiring prior approval of a scheme to ensure the bridleway is made suitable for residential traffic, bridleway users and a bridge structure. This should have been submitted by the developer for approval by Kirklees BEFORE work on the development began.  Kirklees have no record of this condition being being met.

This illustrates the difficulties involved in properly protecting public rights of way in the planning process. In this instance Kirklees would appear to have done everything right in identifying the bridleway affected and putting in an appropriate condition to balance the need for residential vehicular access whilst acknowledging the public status of the lane.

Now the Council is faced with resolving a completely  unnecessary problem either via planning or highways enforcement, no doubt involving meetings,correspondence and the inevitable compromise this will lead too. The cost of this is of course paid by the taxpaying public not just in monetary terms but in the scarce officer time lost on dealing with this issue and potentially the permanent degradation of a public amenity. 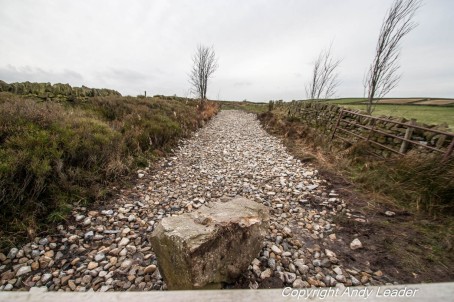 There are the sum total of 8 bridleways in the Parish of Holmfirth out of a total of around 200 public rights of way. In Kirklees only 8% of the 700 odd miles of public rights of way are bridleways. They are a rare and increasingly endangered thing. This is such a shame because their multi use status for walkers,riders and cyclists gives them added value to a wider range of users.

Unfortunately 4 out of the 8 Holmfirth bridleways have featured on this blog which as you know is the A&E of rights of way and for some paths being featured here is akin to having the last rites read to you a few puffs before you’re final breath.

Holmfirth Bridleways 68 & 189 are about to celebrate the first anniversary  of a botched attempt to turn them into a road by Yorkshire Water. This time last year a limestone surface was laid over the existing sandstone which led to numerous complaints from users. Kirklees failed miserably to cure the problem by allowing Yorkshire Water to bury the limestone under a second concrete like foreign substance. More Harold Shipman than Dr Kildare from our local Highway Authority.

Up on Cheesgate Nab Holmfirth Bridleway 134   is on the slab awaiting some unnecessary plastic surgery to remove it’s natural good looks in favour of a wrinkle free but car friendly finish.

Our most recent addition to the ward is Ox Lee Lane – Holmfirth Bridleway 154 now a Frankenstein creation of rocks & road planings resembling a badly put together jigsaw of left over materials. Our Dr Shipman highway authority is lurking at the end of the ward probably about to administer a final dose of indifference to finish it off.

A characteristic of the Holme Valley is the extensive network of “white Roads”. Often if you’re not a local you might not know they exist and that there is public access along many of them. Although the OS are showing many more these days with little green blobs on their maps they do miss quite a few.

I always found the term “white Roads” rather poetic and mysterious but in fact the term is pretty mundane as it refers to how they are/were  depicted on OS maps. A white road between two boundaries or pecked lines but with no indication as to whether it is public or private and hence the sense of mystery.

Cartworth Moor Road is one such white road which pulls up out of Holmfirth to head straight for the moors. It’s much used by locals and has many public paths and several other white roads running off it to form a wonderful network of circular walks of varying lengths.

I walked it’s length today in driving snow showers all the way to the moorland edge before escaping the wind and dropping back into the valley by little used paths to follow the River Holme back to Holmfirth.

This case demonstrates the enforcement capabilities of Kirklees Council. It must have been a difficult and complex case to prove before a court and prosecute successfully. The fine and costs come to £50 odd grand according to the paper which sends out an incredibly strong signal to anyone else thinking of operating in this manner. Of course this is what councils should be doing to protect the environment and public from harm and nuisance where they have the duty and powers to do so.

One of the other  areas of responsibility Kirklees Council has is the  duty to protect over 700 miles of public rights of way in the district. Compared to proving before a court the harm done to residents by noise from a nearby wind turbine I would argue that prosecuting and proving one of the many examples of wilful obstruction to a public right of way is much more straightforward. Clearly Kirklees has the expertise and resources to prosecute such a straightforward matter. A number of successful and well publicised prosecutions for obstructing public rights of way would send out an equally strong message and,I would argue, deter others from obstructing public paths making management and use of the network easier in the long run.

I can’t recall  any recent examples of Kirklees prosecuting for wilful obstruction of a public path despite the many examples they have to choose from but perhaps they don’t publicise this aspect of thier work?